It is known that ADHD is related to neurotransmitters deficiency such as dopamine, serotonin, norepinephrine, etc.
These imbalances have different effects on the brain function activity, and it is reflected in changes in EEG.

According to previous QEEG studies, ADHD is classified into four patterns.

This can be interpreted as being observed due to an imbalance of neurotransmitters.
Measuring QEEG in advance for ADHD can increase the treatment success rate, by determining what pattern that
QEEG has and prescribing individualized drugs with a mechanism in accordance with their corresponding QEEG.

Participant information
– Age : 12 / Male / Diagnosed with ADHD
– While listening to the teacher and if there is different noise, his gaze immediately shifts to that place.
He has trouble focusing on one place, so while taking the test, he couldn’t read the question to the end and got
it wrong while solving the problem.

Compared to healthy people, in the frontal lobe, the theta wave increase,
and an overall increase of slow alpha wave was shown. 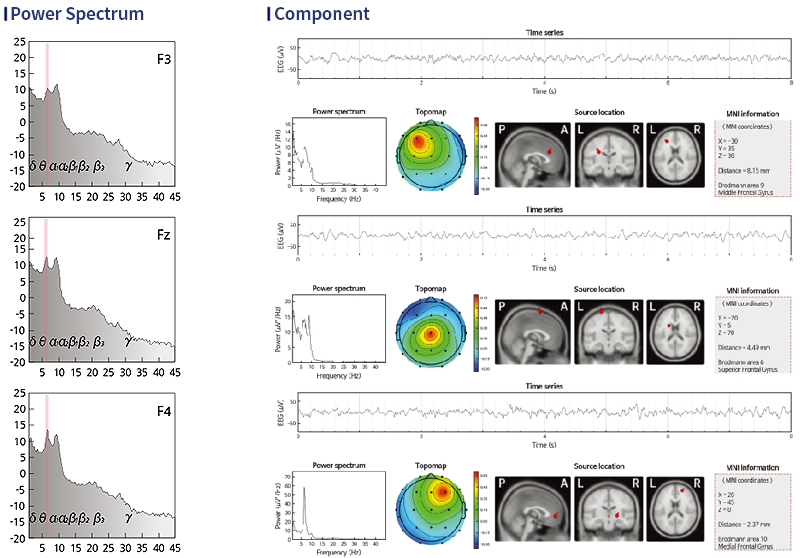 Compared to healthy people, in the Power Spectrum and Component,
slow-waves (Theta wave, Alpha wave) are commonly observed in the frontal lobe.

Compared to healthy people, an increase of the theta wave and Connectivity was shown in the frontal lobe.