iMediSync “Measuring the brainwaves of Astronaut” 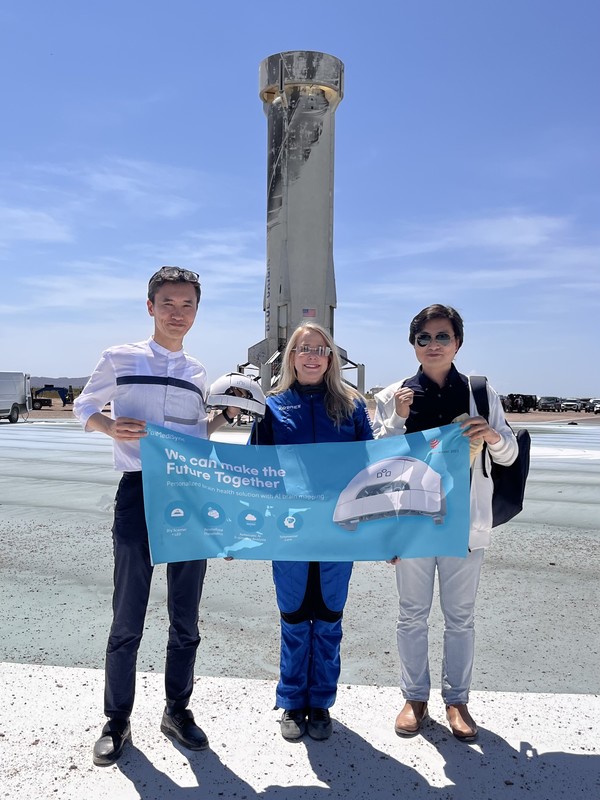 iMediSync Co., Ltd.(CEO: Seung Wan Kang) announced that it measured the brainwaves of an astronaut flying on the reusable New Shepard rocket launched from Texas, USA, on August 4.

Unlike the conventional EEG measuring devices, iSyncWave, which measures the brainwaves of the astronaut, is a dry EEG scanner that does not use electrode gel. Because the device is automatically adjusted to the 10/20 system, which is an EEG measurement standard, it can be easily worn and measured. Also, it is an integrative EEG device that can quickly analyze the QEEG(Qunatitative Encephalogram) based on AI algorithms associated with the normative brainwave data.

Blue Origin has successfully completed its sixth crewed mission and the astronaut of whom the brainwaves had been measured was Vanessa O’Brien (1964, the first woman to achieve the explorer’s extreme trifecta / Guinness World Record). She was one of the six crew members flying on the Blue Origin’s rocket-capsule New Shapard’s 22nd flight mission.

Initially, iMediSync’s QEEG scanner, iSyncWave, was mounted inside the capsule to continuously measure EEG before and after flight and collect omnidirectional data, but this flight was not possible due to restrictions in US aviation regulations. It was conducted by measuring brainwaves before and after launch.

Kang Seung Wan, CEO of iMediSync, said “I had an opportunity to measure EEG in the environment of spaceflight, which is not easily encountered in everyday life, so I was very excitedly looking forward to the results throughout the preparation. It was expected that more meaningful results would be obtained by measuring EEG in all environments from before launch to after launch, but it is very disappointing from the point of view of a businessman and developer that it cannot be measured due to aviation regulations.” “Nevertheless, we are happy to have a new partner who has challenged the unknown field of ‘brain’ and ‘space’ together. Based on this experience, we will spur further research to obtain easy, fast, and accurate results even in new environments,” he explained his future plan.

The participant of EEG measurement, Vanessa O’Brien, is now the Global Ambassador of iMediSync to promote the mental health enhancement, such as introducing iSyncWave in her interview with Sky News in the UK.